How to photograph little owls

How to photograph little owls

Thanks to a Juza's user and of his suggestion, I've update this article adding some scientific info about the little owls.

The distribution of this birds is widespread across Europe, Asia and North Africa, but in some countries has been introduced by man; for example in New Zealand and in United Kingdom. The little owl is a sedentary species and can be found almost everywhere using many different range of habitats. The most used habitats are countrysides with open space areas or near small woodlands, but they can live in urban habitats, like city parks or garden, if the enviroment is pretty quiet. But it can be found also in sandy lands and stony semi-deserts, as well as rocky lands and old ruins. More difficult in high mountains, although it's been seen in Tibet.The little owls can use differents kind of nests, as ground holes, pile of stones, trees, or old countryside ruins. I've never seen them in urban context, but it might be possible, so if you have some news about that, please tell me.

They are carnivorous, and their usual preys are small mammals, like mice, anphibians, like geko, worms and big insects, like grasshoppers. Food in excess sometime is stored in the nest. The indigested food is expelled as a wad, that basically is a mix of bones and feathers. The analysis of the wads permits to understand the preys kind, in fact it's a study method used by biologists.

It's a territorial animal and it defends, when it can, its nest and hunting area, mostly during the breading season. In that period the male hunts for the female, during the while she stays in the nest, but when the chicks are quite indipendent both parents hunt for them.
When they are in danger, they emit particular noises, to warn the mate and/or the chicks, so they can hide themselves.

Photographing little owls can be challenging, mostly if you don't know where to find them. But I'm going to give you some advice in order to take owls' pictures respecting their safety, that's the most important aspect that you always have to remember. I've already written a short article about photographing the little owls, but this time I'd like to talk about others aspect of how to approach the wildlife.

What to use to hide by the little owls?

In many years of wildlife photography, I've learnt that the little owls are less worried about your presence than you'd be expected. But that doesn't mean that you don't have to care about it. I'll never quit saying that the most important thing, in wildlife photography, is the animals safe. And also in this case everything you do might be dangerous for them, so you have to take every precaution to minimize any trouble. But let's crack on the subject!!

But it wouldn't be the same thing... Anyway, there are two kinds of photo blind: commercial photo blinds and home-made photo blinds. It all depends on the situation because there might be many problems with using a photo blind. First of all the field where live the little owls. If it is private property it's always good to ask the owner, in order to get permission for building a fixed photo blind, or at least to get on in the field for taking pictures. I'm always honest with the owner and I always tell them the truth and my intention to build a photo blind, explaining that I'll take away everything when I'll finish photographing the owls. As you know that is a long process, and you'll need a long time for achieving your goals, so take in mind to build a sturdy blind, that can resist strong winds and rains, and hide you very well. This is not a write about building a photo blind, but I'll write something about it in the future, so stay tuned.

What's the main reason for building a fixed photo blind? For sure it's more comfortable because you don't need to take every time your portable photo blind, if you have got one. But the most important thing is that the little owls will get used to the presence of the photo blind day by day.

But if you can't build a fixed photo blind so you can only use a portable photo blind. 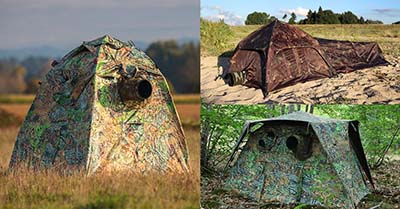 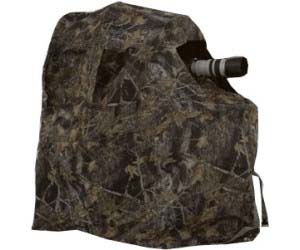 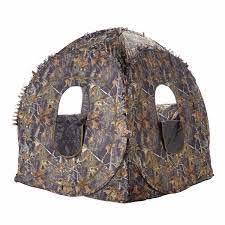 In the market, there are many models by different brands, but I'd like to advise you to get a Tragopan photo blind. To be honest, they don't pay me for that, but their products are really good and really specific for wildlife photography and I've got one photo blind model really nice, light and useful, that I've been using for many years. Have a look at their website to check what they offer.

Every time I can't build a fixed photo blind, maybe because I don't know the field's owner or the field is really far from home, and I couldn't make the right maintenance, so I prefer to use my Tragopan. And don't forget to take a little chair, if you don't want to sit on the ground

What's the best moment to watch/photograph the little owls?

Little owls can be seen all over the year, fortunately. So, please try to not concentrate your attention only during the breeding season. I know the chicks are really cute, but there is always the chance that something goes wrong, so you should prefer the other period of the year. In my opinion, the best moment is during the spring when everywhere is green, there are flowers and nature is awaking, and, if you are really lucky, you might see the owls mating.

After that, you have found the place, or the nest, where they live/hunt and you've built the photo blind, if you can, the right time to go there and photograph them is during the night. As you know, little owls hunt during the night so they stay far from the next quite a long during that period, giving you the chance to arrive without being seen by them. Usually, I check the sunrise time sunrise the day before going to the owls, and I arrive at the place at least one hour and a half before the sunrise. That because there is always a moment of weak light before the sun come up, a moment where they might see you. And you always have to avoid it.

What behaviour should you have?

Your behaviours will influence the outcome of the photographic session. So I follow two main rules:

But before that, I check for someday, from far with binoculars, the situation to understand their movement. When I have time I go there quite often, in order to be more sure, but if I can't I go only someday before, or at least the day before. After having checked the situation I prepare everything for the photographic session: all my gear, food, water and warm clothes!!! Yes, staying stop for many hours can be really challenging and you need to be always prepared for every weather condition, mostly with home-made photo blind that, usually, aren't protected from the rains.

Actually, there are other rules that you have to follow, such as not using alive prey to attract them. I find that practice really regrettable, even because the little owls often take their prey in the nest. I got some photos with the owls hunting and never using a pour mouse stuck somewhere, as some photographer do. I don't find it really ethical!!

Another aspect that you should think about is that you have to not advertise it, only for protecting them. Too many "wild" photographer get the owls in trouble, and it's never good. It's the same question to stuck alive animals. Many "wild" photographer will do everything for making the "perfect" photo of the year, but that's not the respect of nature.

So, keep in mind, first of all, it comes the owl's security than the photos.

Which lens to use to photograph the little owls

Considering the distance of the photo blind from the nest, you have many choices about which lens to use in wildlife photography. Staying at 5 or 6 meters far, using a 600mm you can almost fill the frame, having a really good image quality (I mean sharpness and bokeh). But I have to also to consider the owls' size, in fact, they are small so you might have a need to use a teleconverter, at least a 1.4x tc in order to have bigger subjects. Of course, having longer telephoto lenses will advantage you in many ways: you might stay further from the nest, or photograph also other small birds during the waiting. As you know prime lenses have the best in term of image quality and autofocus speed, but their fixed focal length could be sometimes a problem, so I prefer to use a zoom telephoto lens, like the Sony 100-400GM, if I'm quite near to the nest, or the Sony 200-600G if I'm further to the nest. With both lenses, I can also use the 1.4x teleconverter, so I can cover many situations, from portraits to landscapes pictures.

But you can also use a wide-angle lens for photographing the little owls, putting the camera very close to the nest, or the perch where they usually go or stay. In that case, should be a good idea to protect the camera with a camouflage neoprene cover for the humidity or the rain, but also for other birds or the little owls themselves. Of course, your camera will be far from you, so you'll need a remote control, like a wireless trigger or a smartphone if your camera allows that kind of connection, for controlling the camera and shooting as you need. In fact, in those situations, I use the Sony Edge Android app for controlling the Sony A7RII, or a wireless trigger, connected to the camera. In the market, there are many brands that offer lots of different models for any needs and pocket

When leaving the blind

Ok, it's time to go home, but the owls are still in the nest, or in the perch, so what have I to do? Nothing, you have to do!! Yes, the only chance for not scaring the little owls is waiting until they go away. Maybe they'll so in the nest, or they'll fly somewhere, you can't know it, but that is the right moment. Sometimes happens that a predator, like a buzzard or a marsh harrier, fly above frightening them and to stay safe they might go in the nest, as usual. So if you want to go away is the right moment. You would have to leave the blind quickly. If you are using a fixed blind, won't be a problem storing the camera in the backpack, differently with a portable photo blind you'll need to dismount everything, and it will take more time, so being fast is essential. Of course, there is the chance that the little owls go naturally somewhere, and if after some minute they don't get back, so you can leave the spot quietly.

Ok, I finished with this short guide. Naturally, it isn't exhaustive, there would be others aspect to consider, but to start photographing the little owls I think is enough. Below I put some pictures taken during the years to show you the result of my photo sessions using the techniques wrote before. If you want to ask me something don't hesitate to write at my email or leave a comment in the section below. I also made a video that you can see from my channel or below this guide. 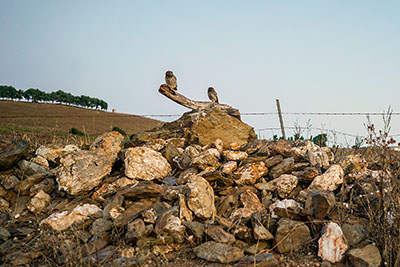 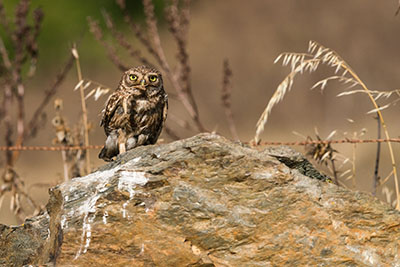 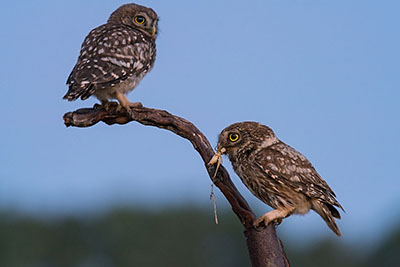