In nature photography, an often crucial aspect in the success of a photographic session is silence.
Many times we focus on what is the best focal length to use or how to hide, inside a shed, with a camouflage net or behind some bush, or to stand upwind, but often we forget not to make noise and our equipment produces noise !!
In fact, many times the subject ran away as soon as he heard the sound of the shot, nullifying the efforts of the setting.
So not being able to buy the latest technology, the fantastic Sony A9 with the electronic shutter that allows 20 silent shots per second, I studied to reduce the shooting noise of my A99II, which will not be a nail gun in terms of noise, but it isn't even a feather that falls.
So what to do if not a nice silencer box to be applied to the camera body !!
At the moment I have two versions, one with a rigid box and one with a soft self-built box. 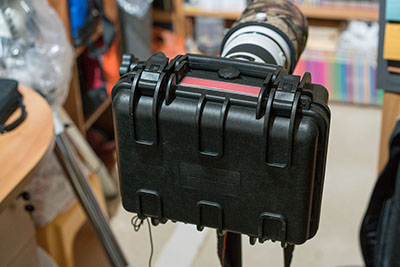 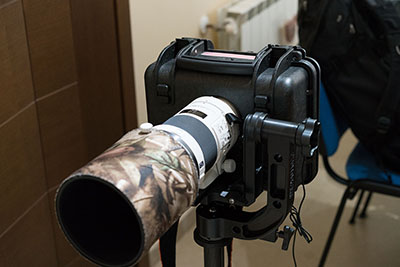 This box is nothing more than an Amazon Basic version, and therefore low-cost, one of the many sealed boxes for the transport of sensitive equipment, as they can be our cameras and that we can buy on many internet sites at costs not really content. On average, a box the size of what I got is around 60/70 euros, but the Amazon is about 30 euros and with the same technical characteristics: watertight up to 1 meter depth for 30 minutes (IP67), impact protection and falls and interior customizable to accommodate various types of instruments (in practice, the foam is precut, then easily shaped).
In order to use it as a silent box, I first had to drill two holes, one for the telephoto insertion (with a diameter of 10 cm) and one for inserting the remote control, essential to shoot when you close the box. 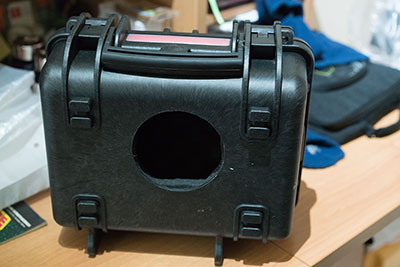 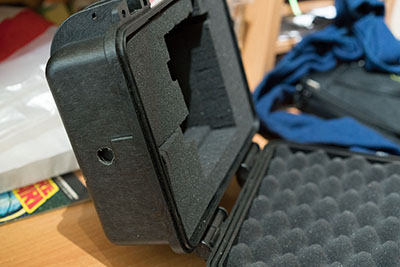 Then I slowly removed the foam blocks to form the shape of my camera to be able to easily insert and use. 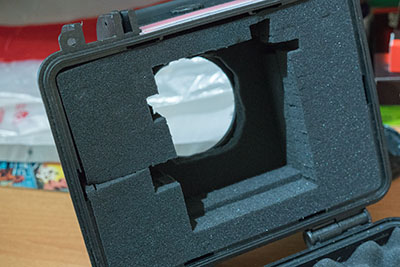 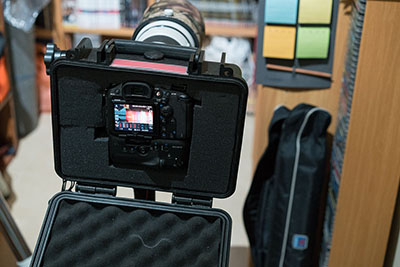 This box instead has been self-built using mainly two components: a camouflage sheet in neoprene of about 2mm thick and two different types of panels adhesive sound-absorbing: one of the two panels being shaped in the non-adhesive part I put it as the last layer, as you can see from the picture. 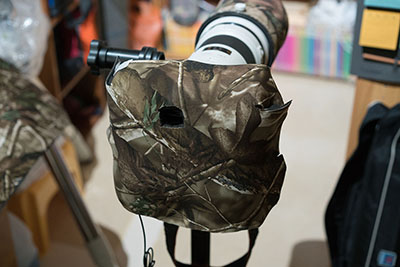 It too has a hole to pass the lens and closes around the camera with velcro, which were glued with hot glue, and always with hot glue junctions were made to make the small camera housing pocket. In this box it was not necessary to make a hole for the remote control because you can easily pass it between the various moving parts, while instead I made a small hole for the electronic viewfinder, so once closed with the Velcro the set can always look from the viewfinder unlike instead of the rigid box that, once closed, does not allow any type of control. 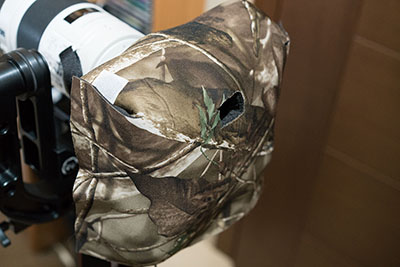 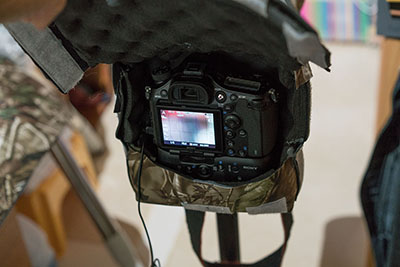 As a part of the shooting vibrations are transmitted to the lens, I realized, with what remained of the camouflage neoprene and the sound-absorbing panels, a cover to be blocked always with the velcro and to wrap on the telephoto lens, which also offers some protection from the rain (even if I have to work on it, being at the moment too big...)

Both boxes reduce the noise of the shot of at least a 40/45%, and given the costs I would say that is not bad.
I made 4 videos, two with the rigid box and two with the soft box, and for both a test was done with the soundproofing sheet and one without.
Here you can see the difference:

Beyond the results obtained that I find are quite similar in terms of noise, especially when the boxes are used in conjunction with the unsuspecting towel, I can definitely say that the soft box offers a slightly better soundproofing than the rigid one, as perhaps it wasn't predictable, and also on the front of the practicality wins, both for the greater lightness and then for the possibility to use at least the viewfinder, which instead in the box is not possible (and that I did not to increase too much  channels" of escape for the noise). Furthermore, the rigid box increases much the weight of the system making it difficult to balance it on the head to balance (perhaps with a sledge ark longer than the one I own on could do, but it is to try), but against in real conditions of use the rigid box, which I also tested in the field, is really very quiet, thanks to the presence of ambient noise, while the soft box I still have it test, even if I believe that I will get performances not much different from the rigid one. A final consideration on the soft box is that I think it can be improved, both as performance and as practicality of use, maybe creating a rigid box, but light, which contains the sound-absorbing material and that I think I'll just have time.

As always if you have some comments and / or suggestions are welcome. Thank you