And also this year the couple of owls have grown their chicks, and I've been very happy watching them and their wildlife. I'm very happy to can see these amazing moment of Nature life, because I live in a small country of Italy, the Sardinia, where the man hasn't destroy everything, although he's trying to do that. But it isn't the topic of this short notes, and I prefer to talk about this fantastic birds. As others years, the couple, have had two young owls that now are big, despite they live near a farm with many animals like sheeps, cows and dogs. This time I've noticed that one of the adult had two ticks under a eye, as you can see from the picture below, and only a few plumages: 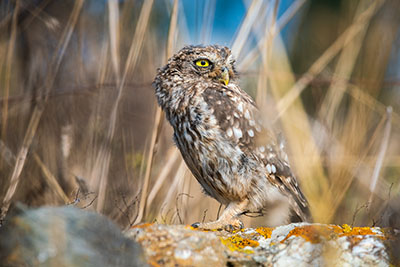 In this period I was following always from far, this breeding couple of common kestrel (Falco tinnunculus), but a couple of weeks ago I had seen some climbers in the Cliff, and despite I was a climber I was annoyed of the situation. Infact the nest of the kestrel is on a route often used for the warm up, so I thought that the climbers would definitely use it annoying the pair of kestrels and their youngs. So uncomfortable I went away and came back in the next few days to check out what had happened and, as I imagined, there was no trace of the kestrels, or at least I could not see them anymore. Day after day, before going to work, I went to check and the kestrels were not visible and this confirmed the abandonment of the nest by the parents. When this happens, the sticks are sown by other birds (there are bugs and hooves in this cliff), but I have seen large mice and foxes, although the latter certainly can not get to the nest.

Despite its size the kestrel is always a hawk even if small, or a skilful preacher of the skies among the most common in Italy and also in Sardinia. Specifically here we can find it even near the cities, a sign of the great adaptation that Nature works to survive, but it is in their natural environment that I like to observe and photograph them, infact every my photos are Wildlife.

Proud as a buzzard

I'm following this couple of buzzards (Buteo buteo) for about 1 year and today, after looking long with the binoculars, I found the nest. It was not easy, because they're a Wildlife animals, but by checking the regular shelters I saw that at one point one of the two adults walked into the woods.

Today with some friends we have tried a steakout for the Stone curlews, birds many alusive. As always we do not lose heart and we go thinking that almost certainly will be the deer.

So it starts the adventure with a meet at 4.30 for to be at 5.20 inside blinds. We already know the place but it's the first time that we go it, so we look forward to the rising of the Sun but... It starts to rain!! The weather forecasts were quite good, with some clouds scattered, while at last the sky was completely covered and sometimes it rained. However inside the hide tent  the rain does not enter and we wait for the stone curlew. After about an hour some horses comes, but there is no trace of the stone curlew, then from far away there are deer and here hearts are warmed ... but  always  very far.