After many time, finally I've seen the juvenile buzzard flight. I don't know when, but the important thing is that it has happened!!

After some months of watching and studying, making also some videos with a my new "friend", I was able to follow the whole breeding season of the couple of "my" buzzard. The process has been long and slow because I could go to check the breeding only once a week, and sometimes I couldn't see anything, maybe for the bad weather or because the buzzard there weren't. But let get started by the beginning.

Proud as a buzzard - part 4

It was so long that I did not take a shot at my buzzards, even though I keep tracking them every week. In fact, during this period, after the young buzzard's flight and the beginning of the hunting season,  adults have become increasingly wary and often do not even get on the cutlery, while the young man has not yet understood what is the man, so he see more. There are, however, some really interesting situations, such as a morning when both adults were on the main ledge to quarrel, while their son looked puzzled at them a few yards away On Saturday 21, with the welcome visit of Cesare (Cece65) and his friend Sandro, I tried to put the mobile hunt in a recession of a long hedge, then I covered it all with a camouflage net to better integrate the shed with the hedge (I have noticed that birds of prey easily notice changes in the environment), and I must say that it worked so much that I could even think of creating a small stall in the bush, using branches and branches that the landowners they left not far from the hut. During barking, the buzzard behaved as usual, doing good or bad always at the same points, but always starting from the trees near the nest, a sign that sleeps near them at night. It is usually difficult to hear a buzz as it is rather silent, but having noticed a certain difference (my mobile shed) I have seen and felt more restless, in fact, only the young man lay down for a few minutes, while the adults they just overwhelmed the area and tried to land but they went away right away. The photo resumes the young buzz when the Sun had not yet turned on, but at least from a PDR slightly different from the usual: 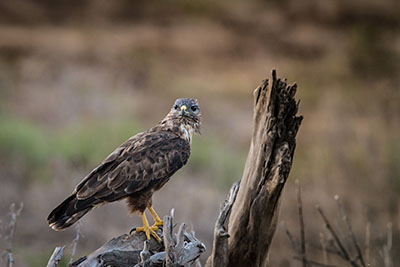 This morning at 7.00 I started the observation with the binocular, but I didn’t see any of interesting. In the nest I didn’t see any movement and I didn’t feel the young call (Who knows if it is ready for the first fly ?? Maybe he did it already…), so I looked around looking for something interesting, but a red woodpecker apart there wasn’t anything.

Time passed and there wasn’t trace of the buzzards, but around at 7.22 I saw one: he was on a rock at the right of a habitual roost. I observed him for 10 minutes then I saw that he fly on the roost. I followed his movements for about 20 minutes then I had to go away… The job waited me!!
The observation session was short but interesting. In addition to seeing one of the two adults I also heard a verse that was probably the other adult, but too far to be sure ... Maybe it could be the young, but who knows.

For the next observation.

And also today the wake up was for the buzzard: 4.30am for to be inside the hunt after 2 hours, when it's already night. But after a little time, she arrives. But I didn't hear her. She comes like a ghost, a moment there isn't and a moment after it's there, and you don't hear anything. Yet the buzzard is not small, indeed with its wingspan of about 120 / 130cm manages to sail even at low altitude, making its flight as silent as a Stealth fighter and making life difficult for its prey. Also this time no pictures of one of the birds of prey that fascinate me the most, having remained only a moment and then fly away, as often happens. But every time the emotion to see her is alway big and I can't wait to do the next stakeout.

These small and colourful birds live in Africa, but for their breeding season they migrate in Europe. In Italy we have some places where they nest. In particular, in Sardinia, there're many small colonies in the whole region, often near sea's places, or where there are sandy grounds, in wich they make the nest: a long tunnel (even more 2 meters) where, at the end, they put the eggs.