And after the coronavirus, finally, arrive the little owls.

It's been a long time since the last time I've seen and photographed them, so I'm very happy now, first of all, because they're still there, in their nest, but I didn't see them. Maybe they stayed hide or they were somewhere, I can't be sure, but knowing that they are fine I'm more quiet.

The session has started, as always, at night and the first pictures are quite dark: 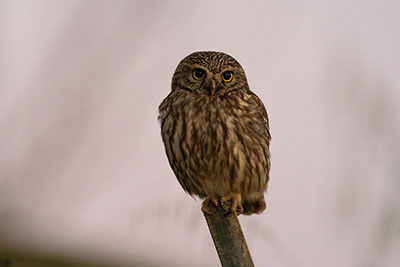 but waiting patiently, the Sun arrives and it lights the little owl: 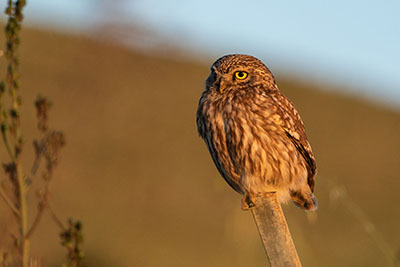 From this point the situation changes a bit, because they get more active, flying often from a perch to another, making me quite busy trying to take some pictures during their flight. In these two photos the little owl start flying from the same perch, but in one occasion had a prey: 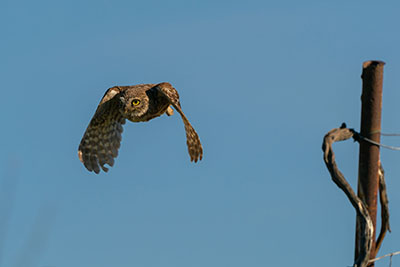 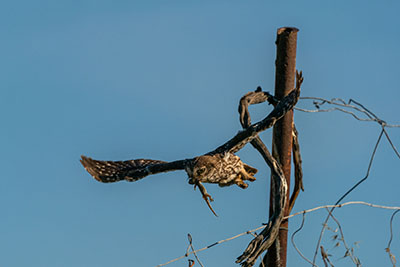 Where finally it eats their prey: 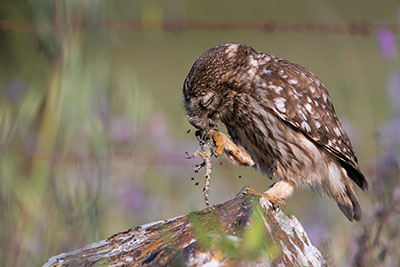 In two occasions they scared for some grey-crows flying too close their nest, so they were really worried, and sometimes they flew away, but coming back almost soon. 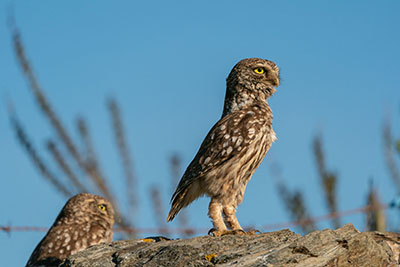 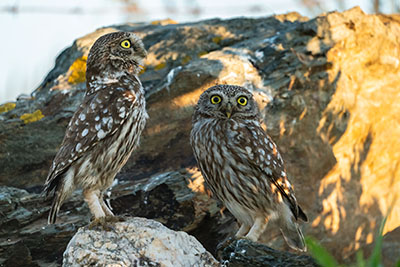 So, after some hours with their company, I can perhaps say that the coronavirus is going away. 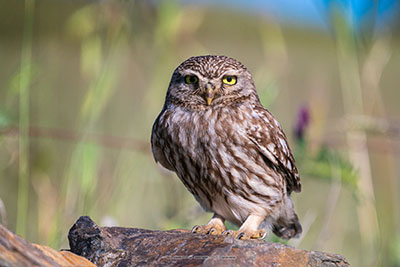 Finally, after almost three months due to the coronavirus,  I've checked my photographic blind. Fortunately everything was fine, so I hadn't to fix anything, like the camouflage net, or some perch. But the best thing has been seeing the buzzards flying and then going in the nest. Yes, they were in the nest too, even though I don't know if there were some chicks, maybe only the eggs.

Then I finded out the red woodpecker nest!! After hearing one of them tap in a tree, I've seen it enter into a hole, signs that they are also nesting.

And for last but not least, I've seen the old little owls again, after several absence months. In the n,est there were two adults and....a Sardinian partridge!! What strange meeting. Surely the little owls were controlling the partridge to avoid something bad to their chicks.

Now I'll have to organize myself in order to follow everything: red woodpecker, buzzards and the little owls.

Yesterday I didn't have so much time, so I stayed there only for a while and I didn't see or hear the peregrine falcon, so I can't say anything about them, but I hope to figure out soon something.

As you know, I've always been really fascinated by raptors and the common buzzard is one of my favourite birds of prey. In my photographic blind it's quite easy to take some pictures of them, as this time. But there're some considerations to do. During the wait I heard the little owls' voices, despite I haven't seen them anymore in their nest. Maybe, and I hope so much, that they have found a new nest for their breeding season. The same for the peregrine falcons, that I was hearing during the photographic session, but I couldn't understand from they came. Finally, looking outside the blind I saw them flying near a group of trees, pretty far from their "house", perhaps they were hunting or simply they were going somewhere, but I can't know. Before going home, I went to check their house; I mean the mountain where they make the nest. Actually I don't know where's exactly the nest, so I can only guessing where it is. Looking with a spotting-scope I saw only one of them: it was on a rock formation, maybe waiting for its mate, or taking a sunbath, who knows.

This year I going to try to observe the Peregrine falcons using my portable blind, because I've put a perch and I want see if they go there. I know, it'll be an hard work, but it's the only way to not be seen.

Coming back to our buzzard, I took some pictures, like these ones: 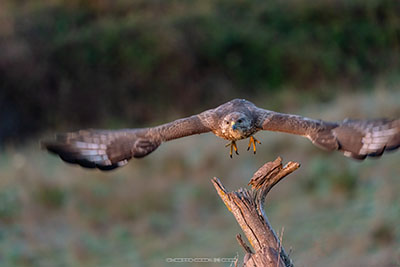 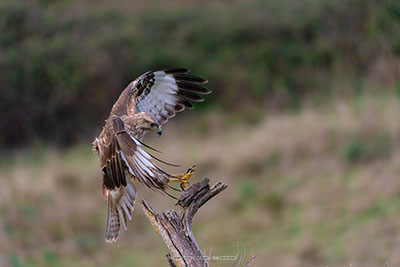 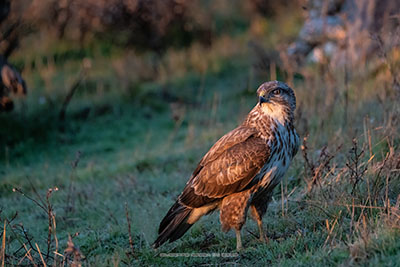 Yes, living with the coronavirus is really frustrating and quite challenging. It's like to be in war where there was the curfew. In fact, in these days our mayor of the city has told us we can't go out from our houses, even for a walk alone in order to be safer and to not infect anyone. It's hard to find someone walking in the streets. You can only go to work or for buying some food in a supermarket, anything else.

At the moment in Sardinia the situation is pretty quiet. We don't have many people infected by the virus, even though some new contagious happens. But in the north of Italy the situation is really dramatic, and they're dying many people every day. The most are elderly people, maybe with other pathologies too, but knowing that so far there isn't yet a vaccine for the virus, is discouraging. For now we can only stay far from the others, even when we are in a supermarket and it's desirable using a mask to avoid any issue.

I'm still working because our company don't have a particular problem for our customers, and we don't have public in our offices. Furthermore, we can work at home using the company's net to use our personal computer from home, and it's good for who have children and don't have any particular job to do or finish.

Thinking about the worldwide situation I'm a bit worried. I think the best thing would be having a vaccine, but at the end only the rich will have it soon, of course after governments, army, doctors and so on. And for the poor countries what'll happen? If in China are dead thousand people, and can't think how many people will die in Africa.

I hope this virus is only a chance and not made with a precise purpose like someone is telling, even though I hope in better.

Let's wait and see what happens.

I hope to see you really, really soon.

It's been a long time since my last diary episode. How you have seen, I've started a new section of astrophotography, so I have to follow different things, including reviews that I hope to write more frequently, both as nature photography and as astronomical photography.

In this episode I went in my usual photographic blind, or, how I like to say, the buzzard's blind :) As always there's something to learn about the buzzards. One of them is always more confident, this time as well, even though for their nature, in general they stay always very careful, looking in every direction in order to check that anybody isn't coming. In the area where they live, there aren't many competitors for the food, so they're quite free to choose their prey without worrying about the other bird of prey, like the common kestrel or the marsh-harrier. The grey crows, that sometimes annoyed the buzzard at the beginning, now stay really quiet, sign that they have accepted the dominance of the buzzards in the territory.

In this picture, there's one of them walking near at their perch: 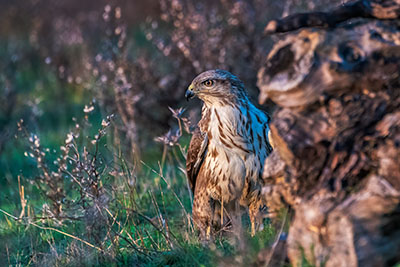 Another feathered friend is the jay, always very noisy. This time I've been really lucky because a jay has arrived really near to me that I can take a portrait picture of it:

It was so close to me, that it was visible the reflection of the tree in its eye. It stayed in the perch for a while, then it's flown away.

In the same area of the buzzards there's another raptor, the Peregrin falcon. But every year they go away, sometimes really soon. Last year I think that they didn't make the nest, because I didn't see any young falcon. So I thought that they haven't made the nest this year as well. But I was wrong, in fact looking on the rock with the binoculars, I've seen one of them, and it's been really exciting. I was really happy to see it again, and I'm looking forward to seeing the next time.

So, stay tuned. See you.