After many time, finally I've seen the juvenile buzzard flight. I don't know when, but the important thing is that it has happened!!

After some months of watching and studying, making also some videos with a my new "friend", I was able to follow the whole breeding season of the couple of "my" buzzard. The process has been long and slow because I could go to check the breeding only once a week, and sometimes I couldn't see anything, maybe for the bad weather or because the buzzard there weren't. But let get started by the beginning.

How who follow me will know, I've put some post about the buzzard during the time, but this year my goal was to make some short video and take some pictures of the juvenile raptor. In fact, I've started to follow the couple just in March, the month where the buzzards mate. In some days I've seen them mate in a field or on a rock, so I was quite sure that everything was going well. In the meanwhile I took some pictures of them: 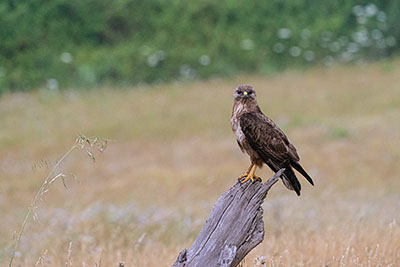 For the moment I can't understand who is the male and who is the female, because it's hard to see them together, and when it happens is only for a few seconds. I've got only one photo with them: 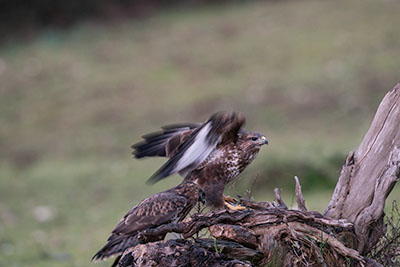 and the only thing that I could say is that the female is buzzard in the background because seems to be a little bit bigger than the other, and if I look for the head colours, the buzzard in the previous photo may be the female, but I'm not sure. I'll know only when I'll be able to photograph them together during a mate.

In the month of May the activity around the nest is really intense, in fact a day I see something moving in the branches of the tree, and watching with binoculars I could see a little white chick!! 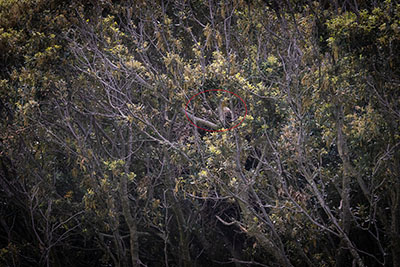 In the red highlighted area, it sees a white spot on the right, but also on the left, even though is not so evident, but this tells me that there're two little buzzards, and this the first time that I see two chicks together in the nest. The quality of the photo is very poor, but I was very, very happy to see the chicks, and involved me to go more often in the nesting area in order to check that everything was fine, and mostly that anyone disturb the buzzards: in some occasion I have found some people walking in the area, and every time I asked to stay far from the nesting area, and fortunately people understood and stayed far.

Looking only with the binoculars often was frustrating, because my binoculars is old and not so optically good, moreover magnify only seven times, so I needed of something more powerful, like a spotting scope!! After some day I bought a new one spotting scope, quite cheap, but quite good for my needs: 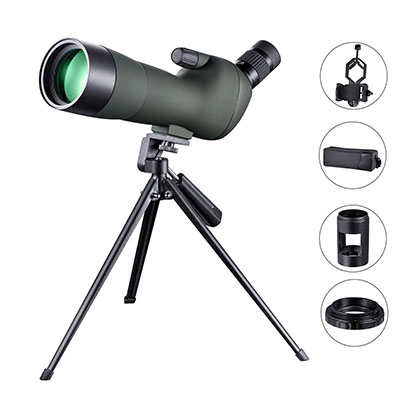 With the spotting scope, using an adapter for mobile, you can take some short video, like this, which it sees the juvenile eating

I'm sorry for the video, I know it shakes a lot, but I was filming inside the car with the spotting scope over the backpack (that was in the passenger seat), and it wasn't stable, so every my little movement made big vibrations. For the next time I'll bought an arca plate to use with a normal tripod, in order to be much stable and easier controllable.

Time after time, finally It arrives today, the day where the buzzards are all free, even if they are never together or near each other, but the emotion has been really big seeing these beautiful birds arriving on the perch or flight away. The juveniles are still clumsy, but I'm sure, they'll learn really soon. In this photo you can see the fluffy white plumage, that will fall really soon: 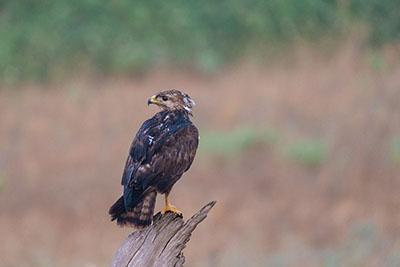 pretty different from one of the adults: 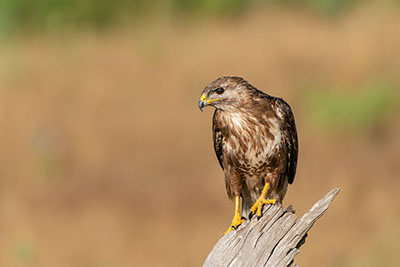 In this photographic session, I was able to use the new tracking AF system of the Sony A9, and I've been really enthusiast for the precision of the tracking. In these three photos you can see the buzzard arriving on the perch from far: every single shot was in focus (I've got the whole sequence of the flight): 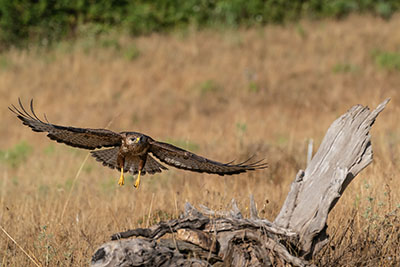 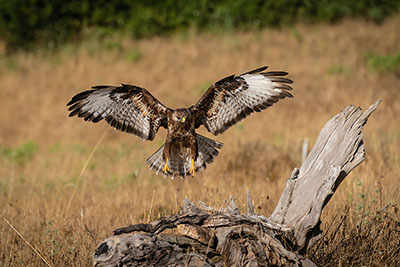 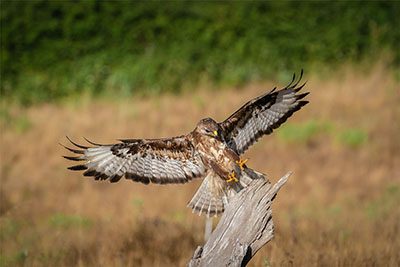 but the best thing of the camera is the silence: the electronic shutter is really, really useful in naturalistic photography because you don't scare the animals.

A funny moment has been when a Eurasian jay has come to see what was happening: 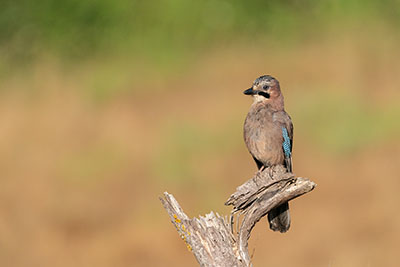 It shouted continuously, perhaps to scare the buzzard, but without much success. As you know, jays, which belong to the same family of crows, are really fearless and do not get scared at all even with bigger opponents.

For now I stop myself here, with the hope to see the young buzzards and their parents really soon, maybe with some new photos. See you soon.