Today is the peregrine day 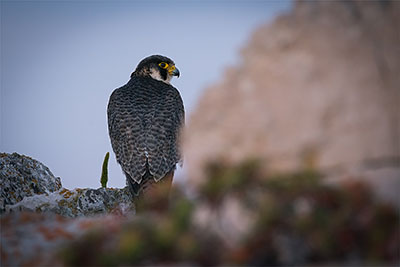 Today is the peregrine day, so I wake up at 3.15 to be in the blind at 5.45. Unfortunately the blind is about 35/40 minutes of walk from the car park, which is about 45/50 minutes from my house. The path for arriving to the blind it isn't so simple because it's easy to get lost, especially in the dark, ma with a gps software we can arrive without any problem (fatigue apart because it's all up).

Today we are confident, even because if the peregrine is not seen, we have decided to waiting the flight of the Young falcon so to have most possibilities to see them. Instead after about 1 hour the peregrine male comes!! Unfortunately, the Sun has just emerged and still does not illuminate the perch, and this forces us to increase the ISO in order to have a decent shot time, even if the camera is mounted on a tripod and in theory it could shoot without the risk of movement. Anyway at ISO3200 I just have a 1/125 second for the shot and 600mm of focal I'm risking a lot. However, we start making some photos. The peregrine falcon certainly feels our shots, in fact, he spins a couple of times but does not seem worried, so we continue for a few minutes until he flies away.
Needless to wait for at least an hour, but we know that it will not come back, as every time, at least not in the morning, so in the end we leave not before we have taken some photos to a lone sparrow that has been seen on the same shelf perch.
This peregrine falcon we have been watching for many months, but at the moment we were able to make a single decent shot some time ago, then nothing else apart today. The reason for this difficulty is not clear, at the beginning we had thought of the blind that despite being perfectly camouflaged with the environment, it still looks like something strange, but this is not because otherwise it would not be seen at all, But we are sure that sometimes comes. It is to be said that the area is also visited by hikers, so nothing strange that seeing occasionally people around the hawk is rightfully more suspicious. To test this we camouflaged in the vegetation an hunting camera and in fact we saw, just near the perch, the passage of people and this is certainly not good for the hawk because he's leaning and too much disorder could make him abandon the nest, even though they usually build them in inaccessible places.